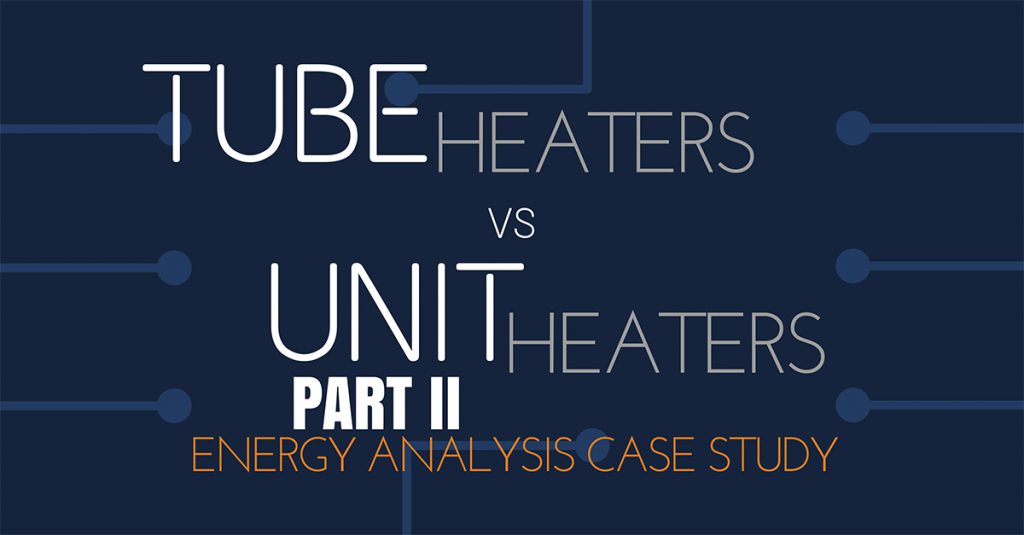 Earlier this spring we wrote a blog post discussing why you might choose unit heaters or tube heaters for your heating only project. The article detailed how each type of system worked, which applications were ideal for each style, and which applications were not ideal. But it was missing something. Where was the real world example? How do we actually determine which heater style is best not just in theory, but with numbers to back it up? Great questions! Let’s look at a real world example now.

A couple weeks ago we received a call from one of our really good customers who asked for some product selection assistance on a project he was working on; a 96′ by 78′ workshop with a multi-tiered roof line. We were asked to do a load calculation and help the contractor select the best type of system to heat the space based on the customer needs. Here’s how it all went down.

We met with the customer on the first cold morning of the year. It was about 40 degrees outside with a 20 MPH north wind, and the day before was 77. The regret for not meeting 24 hours earlier was sky high, but since you really don’t care we will keep moving on.

The owner was not on site when we arrived, so we started to assess the half constructed building so we could get an idea on heat load. The structure was a butler style building with a metal shell, and the walls and ceiling had R-13 plastic wrapped insulation. The long side walls were 10′ tall, and as you moved to the center there was a pair of 18′ peaks, and then a 26′ peak in the center. The long north wall had six 10′ x 10′ overhead doors, and the east and west side each had one 15′ x 12′ and two 12′ x 10′ overhead doors.

The owner finally arrived as we started to put on our thinking caps. After doing hundreds of load calcs similar to this building, we estimated 45 btuh per square foot which came out to about 335,000 btuh of heat load. But before coming up with a solution, we better ask the owner what he wants. After all, it’s his building. Who cares what I think he should do.

cfm: “So what are you looking to do with your space?”
Owner: “Just want to keep it from freezing. We might have a gathering in here every once in a while, but we aren’t that particular on keeping it really warm”
cfm: “What temperature do you want to maintain on the coldest day of the year?”
Owner: (after a long drawn out story about all the examples he might run into) “There might be times we would like it to be 60 degrees”
cfm: What type of power do you have?
Owner: “We don’t have natural gas. We are bringing electricity over here next week”
cfm: “Would you be interested in using propane? It will save you a ton of money on utilities”
Owner: “Yes”

The conversation continued, and we got into what type of equipment he wanted. The owner had done some research and he was interested in tube heaters, although he wasn’t totally convinced yet. We all agreed with tube heaters (for now) and came up with a good product selection based on the 335,000 btuh load, and then mentioned it was subject to running the numbers. We of course checked our clearances based on the tables in the installation manual to make sure we weren’t going to be too close to any combustibles. We also discussed how the heat distribution patterns would work, with most of the heat coming from the burner boxes and then a decreasing intensity the further away you went. So far the owner liked what he was hearing.

So here is the really fun part- now that we have all the information, what is the best solution for this customer? Infrared like he asked for? Or are unit heaters a better option? We certainly don’t want to try to “sell him” unit heaters when he asked for tube heaters, but one or two of you (being a little facetious here) may have an experience in the past with an owner “wanting” something, but then changing their mind once they see the price. So how do we quantify the right solution? We run a cost analysis showing payback and return on investment (ROI).

Here are screen shots from the load calculation and the energy analysis we ran. You might notice that the load ended up being about 315,000 btuh, close enough to the estimated 335,000 load from earlier that we did not make any selection changes.

*The price of propane we used was $1.75 per gallon
**Owner equipment cost is estimated and does NOT include installation labor, gas or flue piping, electrical, thermostat wire or hanging hardware for the unit heaters.

The tricky part about running an energy analysis on infrared is there are no published efficiencies. So what do we use? Well, we know the flue gases don’t condense, so our combustion efficiency can be no more than about 82 or 83%. But one thing we do know is infrared keeps the heat down low to the floor, which will reduce the heat load on the roof (our delta T between the ceiling and ambient air will be far less with tube heaters which will reduce overall load). And our air changes will also be reduced, especially since the ceiling is 26’ tall in the center. With forced air, the ceiling air will be warmer and it will want to leave the building much faster than the radiant solution. So to account for both of these factors, we reduced the roof load and the air changes per hour to come up with an effective “radiant heat” heat load of 270,000 btuhs.

The moral of the story will be different for every job. But for this project, it probably makes sense for the owner to proceed with tube heaters. A 3.7 year payback is pretty good, and it’s hard to argue with a 26.7% ROI. You won’t find that kind of return in the stock market, unless your name is Warren Buffett. And in that case you’re probably not reading this article.

What has been your experience with tube heaters and their energy efficiency compared to 80% unit heaters? Do you have any jobs that we can help you look at? Just ask us in the comments below, or give us a call toll-free @ 1-800-322-9675

Connect on:
Brad Telker
Vice President of Sales, Applied Systems Group at cfm Distributors, Inc.
Brad was born and raised in St Louis Missouri, where he spent the first 18 years of his life. At the ripe young age of 18, he embarked onto his next big adventure, traveling to the University of Missouri Columbia for a bachelor’s degree in Mechanical Engineering. Brad joined the cfm team in 2006, and now as the Vice President of Commercial Sales, he focuses on business development, as well as helping contractors and engineers find creative and unique solutions to any size project. When he’s not at work, Brad enjoys photography, running and spending time with his family.

Connect on:
Latest posts by Brad Telker (see all)

How Customers Find Your Business

Back to blog
Back to top